Last fall a writer friend asked me, “Is it worthwhile having a book launch?”

I immediately answered, “Yes.” I’d hosted launches for my first two novels and planned to have one for my third release, To Catch a Fox. But my friend’s question prompted me to ask myself: what is the value of a bookstore launch in this age of e-books and online sales?

So here are my Top Five reasons for hosting a book launch.

1. It is a gracious way to tell people about my new novel. Instead of sending an email notice and link to a sales site, I am inviting them to a launch party. Some will feel pleased that I included them in my special event. Most won’t come to the launch, but they’ll have enough details to buy the book online or at their favourite book store, without my asking them to do it.

I’d suggest inviting everyone in your circle of acquaintanceship. For my first launch, I asked people in my gym class I’d barely spoken to before.

“You’re a writer?” some said, intrigued.

It started conversations and closer connections because I’d shared something personal about myself.

2. If you invite people, many will come. My first book launch drew close to 100 people, my second about 85. Both times, they packed the bookstore and a fair number bought copies of the book. Admittedly my two novels were long awaited releases. I’d worked on the first book for years before finishing it and finding a publisher; the second wasn’t published until 6 years later. Now with only a two year gap between my second and third launches, I don’t expect friends and relatives to feel as strong a need to come out and support me. But I’m hoping that newer friends and–dare I say it–fans will make up for some attrition.

3. Local media is more inclined to focus on an event the public can attend than on a book release. The entertainment editor of my Calgary Herald newspaper profiles an author most weeks. When he chooses a local writer, it’s almost always someone with an upcoming book launch or major reading. He schedules the piece for the week leading up to the event. Other local print media, radio and television might be similarly event-focused. It’s hard to get your books into any media, but a launch gives you a better chance. Independent bookstores also focus on events to draw customers and are likely to display your books and the launch announcement in their store windows during the week leading up to the launch.

4.  You might make your newspaper’s local bestsellers’ list. The Calgary Herald, my daily newspaper, publishes a local bestsellers’ list in its Saturday edition. The tiny print at the bottom states the list is complied by information provided by the Calgary’s 2-3 independent book stores. Sales at these stores are so low that any book that sells decently at a launch is almost guaranteed a spot on the list. Many newspaper readers look at the list for ideas of what to read. I know that other city newspapers have this feature. It’s worth checking out.

5. And lastly, a launch is a celebration. You’ve worked hard on this book and deserve a party with family, friends and your devoted readers. Many venues are free or inexpensive. Food and drink might set you back $50-75, but aren’t you, your book and your supporters worth it! 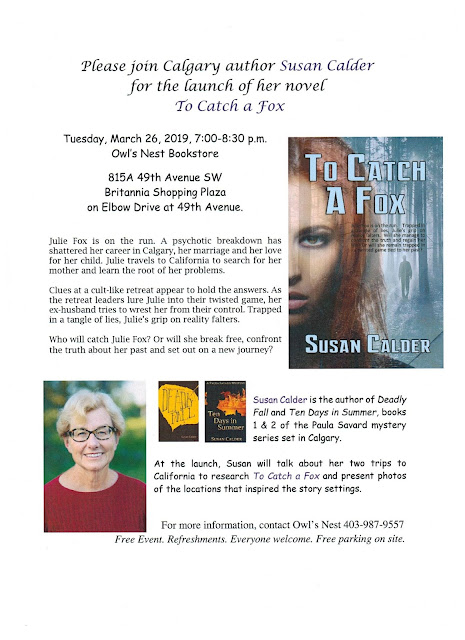