Recently, I was intrigued by a newspaper article titled, U.K.’s New Grammar Rules Say What!?!! Banning exclamation points could make them ‘cool.’

In my writing classes, I have long taught students to avoid this punctuation mark because it is ‘telling’ not ‘showing.’ Exclamation points tell the reader, My last sentence was exciting! Amazing! Incredible! Awesome! The writer should show this with her words as well as engage the reader by letting him decide for himself how amazing the statement was.

For my serious writing, I never use exclamation points. Well, I’ve relaxed my rules lately, so I might insert one or two per book.

Emails are another matter. When writing them, I don’t take the time to shape my words to be sure the meaning I intend is coming across. Exclamation points are a convenient shorthand. In emails, I feel anything goes punctuation-wise. I don’t tend toward strings of exclamation points or question marks, but if you want to portray yourself as an enthusiastic, casual person, why not? 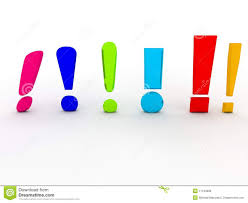 Likewise, in emails I make liberal use of emoticons for fun and to avoid offending a recipient with any thoughtless words. I often use parentheses and dashes. In books, when I find more than one phrase in brackets per page or two, it makes me feel the writer is too lazy to construct sentences that flow into the next.  Occasional parentheses can be funny; too many are jarring (they jerk the reader out of the narrative).

In the newspaper piece, gripes about the British school system’s new ban on exclamation points were largely against making this a rule, as opposed to teaching students the negatives about exclamation points and to think carefully before using one.

I think the ban will tend to lead to this kind of teaching rather than result in the elimination of the dreaded punctuation mark, or make it cool for rebellious youths.

One educator objected to the ban on the grounds that it will confuse students, when the exclamation point is used so frequently by world leaders. He notes that Donald Trump’s website is littered with them (“I won’t let them take away our guns!!”)