In 1996, through the Calgary writing grapevine, I heard about the Alexandra Writers Centre Society, a combination writers’ support group and independent school in the trendy Inglewood neighbourhood. Classes involved 5-8 students sitting around a table with an instructor. No marks or exams. The AWCS offered a novel workshop course that sounded right for my novel-in-progress.

During the 8 week course, my submissions received lots of critique that made me see how much more work was needed to make the book publishable. Like most writers starting out, I had believed completing a first draft meant the job was mostly done.

I took a second novel course with some of the same people from the class. When this course was finished, a woman in the class invited me to join a private critique group she was forming for people writing novels. The AWCS let us use one of their rooms for meetings. My work received more criticism. It hurt, but when I got home and reviewed the written remarks, the critique didn’t look so daunting. I found myself coming up with solutions to deal with readers’ problems.

A year or two passed. The critique group disbanded. I decided my book needed stronger critique and signed up for a correspondence course through the Saskatchewan Writers Guild. The course functioned like today’s online mentorships, except our exchanges were via snail mail.

My instructor began by reading the book’s first chapters, and maybe more. Her advice was to make the story a kind of detective search, with my protagonist, Julie, actively searching for her mother. In my existing draft, Julie went to Vancouver to search, but became distracted with a married man and other activities. The instructor’s suggestion makes sense to me now and it did then, but it was a drastic move that led to my re-starting To Catch a Fox from scratch. In the new version, Julie’s quest followed the Pacific Northwest coast from Vancouver to Oregon and ended in the British Columbia Interior. After 7-8 months, I had a new story that my instructor and I agreed was better than the earlier one.

Except, what should have been obvious hit me now: I had scrapped my novel-in-progress.  After years of work, I had moved backwards, not forwards, and was facing another first draft that would require heaps of revision. For the first time since I started writing, I wanted to quit.

What pulled me out of the slump, ultimately, was sitting down at my keyboard and discovering that I enjoyed writing for its own sake, regardless of the result.

I revised my new manuscript, sought further critique, revised again and sent query submissions to publishers. A few complimented the writing or the story or the character’s voice, but no one requested the manuscript. After about twenty tries, I gave up and put the novel in the drawer.

In writing, as in everything, there’s a balance between perseverance and knowing when to pack it in. I wish I’d persisted less with this book and worked on other story ideas. I might have learned more about writing this way or even ended up with a book that got published.

Or maybe what happened was all part of the journey. 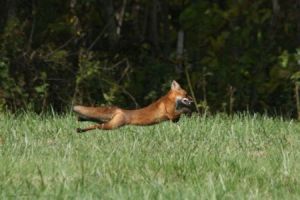 I was certain To Catch a Fox was put to rest and I was fine with this. Most authors have one or two practice books in the drawer.

I never dreamed the fox would leap out and bite me again.