On Remembrance Day this year, I reflected on my trip to the Canadian battlefields of northern France in my post on my publisher’s website. Here is the post, for those who missed it.

Yesterday, November 11, marked the 100th anniversary of the formal end of World War 1. The occasion led me to remember my trip to Europe three years ago with my husband Will and our son Matt. We began our tour of Canada’s battlefields with a stop at the Canadian National Vimy Memorial in northern France. 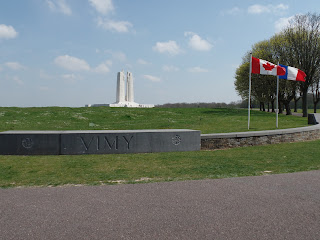 From the Vimy visitors’ centre, we walked up to monument, past a section of land that has been forested to prevent erosion. A sign told us that the bumpy terrain was caused by mine explosions during the war. German troops planted the mines when they occupied the strategic ridge from 1914-1917. The explosions went off as Allied forces advanced up the hill. Barbed wire fences and “Keep Out” signs warned that unexploded munitions remain buried under the grass. 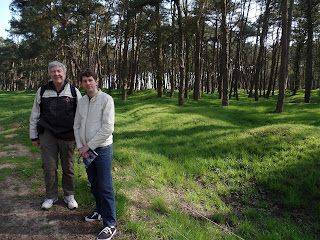 Our approach led to an impressive sight. Sculpted of Croatian limestone, the Vimy monument features 20 human figures representing peace and the defeat of militarism. 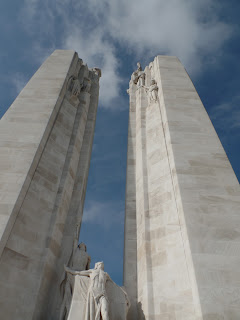 The names of 11,285 Canadians killed in France whose graves are unknown are inscribed on the memorial’s outside wall. Back down the hill, we stopped at the cemetery for the Canadian soldiers who died at Vimy or on neighbouring battlefields. 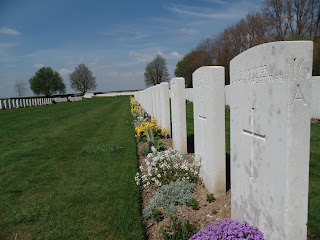 Student guides conducted a tour of the preserved trenches and tunnels. 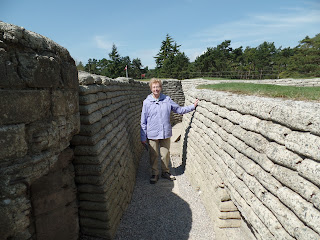 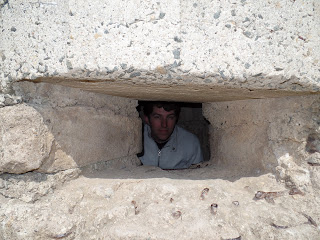 Moved by all we’d seen at Vimy, we drove to the Beaumont-Hamel Newfoundland Memorial. Newfoundland didn’t join Canada until 1949 and fought as a separate regiment in WWI.

On July 1 1916, the first day of the Battle of the Somme, the Newfoundlanders left the trenches to storm a ridge occupied by German forces. Most of the soldiers made it less than half way before they were mowed down by German guns and artillery. An Allied explosion set off earlier had warned the Germans of the impending attack. The Newfoundland regiment failed to take the ridge. 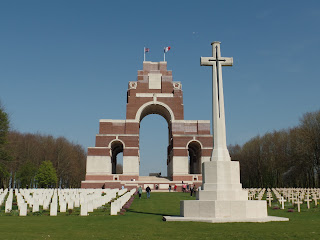 We left France and drove toward Bruges, Belgium, for several days of respite from war. But on the way we stopped at Ypres, the location of several WWI battles that virtually destroyed the city. After the war the city was rebuilt to its former style, attractively we felt.

At the Ypres Memorial to the Dead, people were setting up for the weekend’s ceremony to commemorate the first poison gas attack, which took place in Ypres in April 1915. Lights shining on the stone monument’s list of war dead cast an ominous glow. 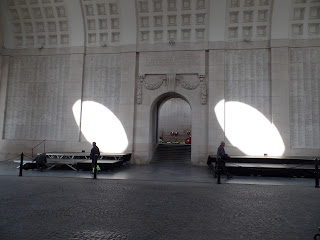