Before this May I had been to London, UK, twice. Like most tourists I spent most of my time on the north side of the Thames River. But five years ago my husband Will and I enjoyed a short walk and café meal along the river’s South Bank. So on this third trip we wanted to see more of this side of London and, in particular, visit the rebuilt Globe Theatre, which opened in 1997. On a sunny Sunday morning, we walked from Paul’s Cathedral across the Millennium Bridge to Shakespeare’s Globe and bought tickets for the tour and exhibition.

The original Globe Theatre was built in 1598. Actor-playwright William Shakespeare owned a share of the company that chose the location across the river because it was outside of the City of London, which had laws restricting unsavoury activities like theatre and prostitution. Plays of the time had to take place under daytime’s natural lighting, which meant attendees couldn’t be working.

The Globe thrived for 14 years and presented many of Shakespeare’s greatest plays. In 1613, during a performance of Shakespeare’s Henry VIII, a stage cannon misfired, igniting the thatched roof and burning the theatre to the ground. Records state that only one man was hurt, but he was saved when his burning breeches were put out with a bottle of ale. The company built a second Globe with a tiled roof. It’s believed that Shakespeare never wrote for this new Globe, which was closed with all the English theatres in 1642 by the Puritan government. Two years later the Globe was demolished to make space for tenements.

On the tour we learned that the modern Globe was the brainchild of American actor and director Sam Wanamaker. When he first

in 1949, Wanamaker was appalled to discover the city contained no acknowledgement to the theatre intimately associated with one of the world’s greatest writers. Wanamaker founded the Shakespeare Globe Trust, which raised funds and conducted research on the historical Globe. They discovered that the modern theatre couldn’t be built on the original site, since a historically designated building occupies the spot. So the new Globe is about 750 feet (230 m) away.

The Trust’s objective was to construct a Globe as close as possible to the original, using the old building techniques, while taking into account modern fire regulations. The building is open air, with a roof made of reed thatch, based on samples found during the excavation of the original site. I had always assumed the Globe was round, but research determined it was 20-sided polygon. Little was known about the stage, so the designers relied on accounts of other theatres of the time. In the end, today’s Globe is as accurate a reconstruction as current knowledge could make it. 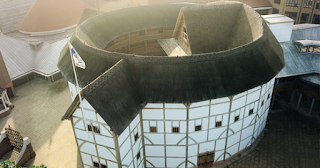 Inside the theatre, we sat on the tiered seats while the guide explained that the stage was designed with three levels. Elizabethan theatre goers would understand that characters descending from the ceiling painted heavenly blue with clouds were good guys, while those rising from a trap door in the floor were evil.

The guide pointed out that the most expensive seats in Shakespeare’s time were located high up on the side tiers, rather than lower and facing the stage, because the wealthy were more interested in being seen rather than having the best view of the show. The area in front of the stage, called the pit or yard, allowed the poor in for a penny. This must have been a smelly place, since the crammed-in people were drinking beer with nowhere else to go to relieve themselves. The modern Globe honours the tradition by selling standing room tickets for £5, but provides bathrooms in the wings. Still, today’s budget attendees must stand for three hours, among a crowd of 500 people and exposed to the elements. Umbrellas aren’t allowed. I would splurge for a seat. Prices range from £19-47 for this summer’s production of Hamlet, which is reasonable compared to London west end theatre. Since the Globe seats are hard with no backs, patrons can rent cushions and seat backs.

I think it would be marvellous to watch a Shakespeare play performed in the setting the playwright had in mind when he wrote his great works. But with so much to do in London, Will and I limited ourselves to the tour, which included a peek at the associated Sam Wanamaker Playhouse, an indoor candlelit theatre inspired by the old Blackfriars Theatre. We ended with a walk through the Globe exhibition about the building reconstruction and the history of Shakespeare’s time. It turns out the Globe name derives from a Latin quote by Petronius “because all the world is a playground,” which Shakespeare evidently borrowed and changed to “all the world is a stage.” 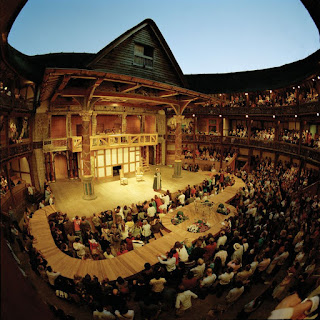 This blog post originally appeared on July 12, 2018, on my publisher’s website in the Books We Love Author BlogSpot.