For those who missed it, here’s my post that appeared on my publisher’s website on June 12th.

One thing I love about travel to the United Kingdom is that I can’t go anywhere without stumbling over a place associated with an author I’ve read or heard about. This May my husband Will and I started our holiday in England at the home of our friend Barb, who lives near Gatwick airport. While researching possible day trips, we discovered that writer Jane Austen had lived in Chawton, Hampshire, about a one hour drive from Barb’s town. Jane Austen’s House Museum is the only home where the author lived and wrote that is open to the public.

I’ve loved Austen’s writing since I studied Pride and Prejudice in high school English. I subsequently re-read the novel several times, watched numerous film versions of it and read all of her other books. Emma is my second favourite. Barb is not a romance reader and had never been drawn to the stories, but she offered to drive us to Chawton. We began our visit to Jane Austen’s former home with a picnic in her garden. 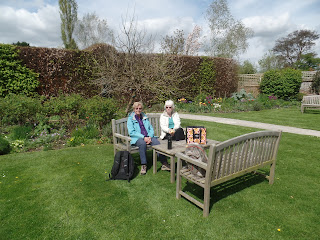 Jane lived in this house with her mother, sister Cassandra and friend Martha Lloyd from 1809-1817. Prior to this the women had rented a smaller place. But a childless couple took a liking to Jane’s oldest brother Edward, adopted him and left him their Chawton estate. Since his obligation was to provide for a widowed mother and husbandless sisters, he offered them the house for life. This was a great step up for the women, who could now live rent free with more disposable income. Their original garden, larger than today’s, provided them with an orchard and vegetable patch.

At the Austen home, we learned that Jane had already drafted her novels when she moved there at the age of 34. Content in this improved environment, she started work on revisions. Another brother, who lived in London, submitted her first polished manuscript to a publisher. Sense and Sensibility by A Lady was published in 1811 to public and critical acclaim. A bedroom in the museum displayed an advertisement for her second novel: Pride and Prejudice by the author of Sense and Sensibility. We asked a volunteer guide why Austen had published anonymously. The guide said that the novel was a fairly new written form at this time. Poetry was the viewed as the only true literary writing, while novel writers were considered somewhat sketchy, especially women writers. The guide added that Austen was known as the books’ author in literary circles, but the public was kept in the dark.

Jane Austen went on the publish the rest of her novels while living in the Chawton house. The guide believes that Jane would have continued to live there and write more books if she hadn’t become ill and needed to be closer to a hospital. Jane died too young, at age 41 in 1817, probably of Addison’s disease or stomach cancer.

The tour left me with the impression that Jane Austen lived a mostly happy life, enhanced by close family connections, friendships and writing satisfaction and success. But her own story shows the constraints for women of her time, forced to carve a fulfilling life in a world skewed toward men. Her novels reflect this experience and may be one reason why they still resonate with people today.

We finished the tour on a fun note–dressing up in period clothing. The next day Will and I left for London. Barb sent us an email saying the visit had inspired her second venture into Austenland, by reading a non-fiction history of Jane Austen’s time. Who knows? Jane might have picked up a new fan.