Saturday was the busiest day at the Bloody Words Conference that took place in Toronto from June 1-3, 2012. Sessions ran every hour from 9:00 AM to noon and, after a break for lunch, 1:30 – 5:30 PM. The evening featured a banquet with speeches and awards.

Each hour offered three choices. My first selection that morning was a panel of agents, two from Canada and two from the United States. The format was largely question and answer. One audience member asked if US agents were prejudiced against novels set in Canada. All four answered no; a good story is a good story. They also agreed that one of the first things an agent does when she receives an appealing query is to Google the writer to check out her web presence.

Next, I opted for the session with Gayle Lynds, this year’s Bloody Words International Guest of Honour. At the conference in Victoria last year I’d found it interesting and informative to listen to an author at the peak of his or her game. Lynds was no exception.

Lynds writes thrillers, which were the conference focus this year. Do you know the difference between a mystery and a thriller? Mysteries are about whodunnit, which is typically revealed as late as possible in the book. In a thriller, you usually know the bad guy right off.  Reader engagement comes from the suspense of wondering if the bad or good guy will win.

I haven’t written a thriller, but Lynd’s topic “Nine Secrets to Writing a Bestselling Thriller” are worth considering for all kinds of writing. The secrets are:

1. Characters. Larger-than-life characters that grow larger in the story. Or ordinary characters thrust into extraordinary situations who pull themselves up by their bootstraps. From the beginning, the hero is in jeopardy. You also need worthy villains who have at least one redeeming quality to make them real.

2. Know Your Dramatic Question. This gives you the spine of your book. What does the hero want? What does the vllain want? Connect those questions with OR. An example: will a mad scientist unleash a virus that destroys the human race or will an introverted bookkeeper save the world?

3. High Stakes.  With the heroine having a personal involvement.

4. Rivetting Concept. An idea so catchy that the book sells itself and makes the story exciting. Train your brain to think high concept.

5. Multiple Viewpoint. Learn the point of view rules so you can break them. With multiple viewpoints, when you come to a dialogue conflict between two characters it’s exciting for the reader, who unconsiously roots for both to get his way, even the villain.

6. Exotic Setting. But this can also be something familiar we learn more deeply about. (I wonder: does this rule and rule #1 cover just about everyone and everything?)

7. Mood and Tone. Get the story rolling before introducing flashbacks or a lot of description. Portray exciting scenes and description through the eyes of your point of view character.

8. Suspense. Compress time. Try to cut down the number of days in your story. Start the book with an action, not with weather or a character awakening from sleep.

9. Finale. A big book needs a satisfying ending. If there is violence at the start, there should be violence at the end. Tie up all key story threads. If you can’t tie up a subplot by the end, you might not need it.

Lynds added that the average writer has four unfinished novels in the drawer before his first novel is published and spends ten years writing before getting published. Is that encouraging or not? It depends where you are on the ten year and novels-in-the-drawer slope.

I continued my plan of hearing authors at their peak by following Lynds’ session with the Conversation with Linwood Barclay, the Bloody Words Canadian Guest of Honour.  While Lynds writes macro thrillers – ones with large characters and international settings – Barclay is a master of the micro or domestic thriller, that is, thrillers about ordinary people in geographically confined locales dealing with an extraordinary situations. Author Stephen King has become a big Barclay fan. King called Barclay’s most recent novel “Never Look Away” one of the best books he’s read this year. 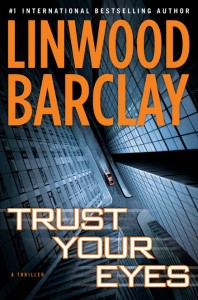 Linwood Barclay began his writing career as a humour columnist for the Toronto Star. Not surprisingly, he’s a funny and entertaining speaker. His first four novels were a comic series. When they weren’t mega-hits, on his agent’s advice, Barclay switched to darker material. He also sets his novels in the USA partly for marketing reasons, but he was born in the US, regularly visits his US relatives and his first publishing interest came from US publishers. It made me think I should have been more strategic in my writing choices.

The interviewer asked Barclay what dark secrets in his life inform his material. Barclay answered that when he was 16 his father died. He may be working out this experience in his writing, since his stories tend to be about losing people.  Another question: Why did Barclay go from writing a series to writing stand alone books? With stand alones, you can raise the stakes for your protagonists and do worse things to them. In a series, your character can’t repeatedly have the worst day of his life (What about Jack Bauer from 24?). In a series, with each book, half the work is already done – ie. the main characters and other details are created – but you are limited in what you can do.

After Barclays’s session, I ran into two women who had attended my Thursday talk at the Pape-Danforth library. They invited me to lunch with five other writers. Conferences are about making new acquaintances as well as sessions.

When lunch was done, we all hurried back to the Hilton for an equally informative afternoon. Stay tuned.