Here I am surfacing after almost a month away in Ontario, New Brunswick and Maine. I took my laptop on this trip and thought I might blog occasionally while away. Not surprisingly, I found no opportunity or inclination to blog – or do any other kind of writing.

The Toronto portion of the trip was part Deadly Fall business. I attended the Bloody Words Mystery Writing Conference and did talks at three branches of the Toronto Public Library and at the public library in Beeton, an hour north of Toronto.

My first talk was at a Scarborough branch, near the home of my sister- and brother-in-law, with whom I spent the first two days.  Bernice, Bill and my husband, Will, came to the talk. Their presence, along with the librarian’s, swelled the attendance to nine. As we waited for people to trickle in, the early-bird attendee asked a question. The next arrival picked up the thread; so did the next and next one. I answered questions for over an hour and never got around to my speech, although the questions more or less touched on my prepared material.

The next day was Beeton. As it happened, a street fair was going on that Saturday afternoon; the library on the main street was located smack in the middle of the fair.  Outside the library entrance, the librarians set up an attractive poster announcing the event.

I hoped for a sudden downpour at 2:00 PM to drive people in; there wasn’t much chance  of that given the clear blue sky. Still, the event drew a dozen people who enjoyed a generous snack of grapes, cookies and tea.

This time I went through my speech, followed by questions. Will thought this worked better than the previous day’s straight Q & A approach.

I spent the night at the home of Catherine Jackson, a high school acquaintance I reconnected with on facebook. Many thanks to Catherine and her husband, David, for their terrific hospitality in their historic home, for inviting other Lachine High alumni over, for setting up the speaking event, putting up posters and getting Deadly Fall into their local library.

After a few days of relaxing with friends Kitchener, I spoke at the TPL Avenue branch. 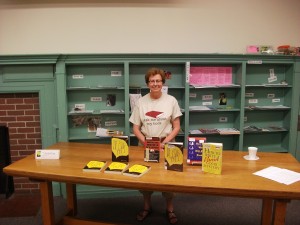 I began by asking the attendees if they were there as mainly readers or writers. Three said they were writing, so I tailored the presentation toward writing. A couple of them madly took notes.

The last presenation took place two days later at the Pape/Danforth branch. Will and I began the day with a walk from our downtown accommodation to the largely Greek neighbourhood, where we met our sons for lunch at a pizza restaurant. The Pape-Danforth afternoon “Tea and Murder” gathering is a monthly event, although the librarian told me afterwards that my appearance drew a number of outsiders. In contrast to the previous talks, people were lined up to get in. The packed room pumped me up and ended the four sessions on a high note.

The following day, the conference began. I was glad to shift from the role of speaker to simple attendee. More about the conference in the next blog post.