For my July post on the BWL website, I wrote about a book I read during my spring holiday in Malta.

When I travel, I like to read books set in the place I’m visiting. Before my trip to Malta this April, I took out an e-book from my local library. The Information Officer by Mark Mills helped me appreciate many of the sights I saw in this island nation in the Mediterranean Sea. The novel takes place in the summer of 1942, when Malta was a British colony. Its strategic location 50 miles south of Italy made Malta a target for Hitler in WWII. During the novel, the Maltese are enduring daily bombings by Axis planes launched from Sicily.

The Information Officer is a detective novel. Our hero, Max, is, essentially, the British officer in charge of propaganda. His job is to boost the spirits of the Maltese civilians under continuous attack. Max investigates the murder of several women, whose deaths are being ignored by his superiors. Is there a cover-up? Are the murders an attempt to undermine Malta’s resolve to sacrifice for the war? In addition to bombing the cities, Axis planes are sinking cargo ships bringing food and supplies and the residents of Malta are close to starvation.

In the Malta at War Museum, my husband Will and I put on hardhats to explore an air raid shelter built during the siege. A character in The Information Officer commented that the Maltese had become creatures who lived half their lives underground. The tunnels included hospital and birth rooms for those who needed those services after the air raid whistle blew.

The siege effectively ended in November 1942, after the Allies sent Malta 163 Spitfires for its defense. King George VI awarded the George Cross for bravery to the citizens of Malta. Each April, Malta commemorates the deaths of the 7,000 soldiers and civilians who died during the siege. Other countries, including Canada, still send flowers. 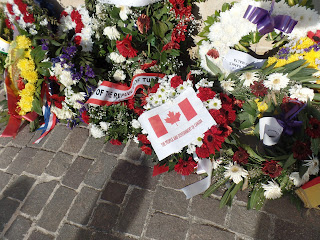 The novel also mentioned other aspects of Malta, which we encountered on our visit. The Dingli cliffs, the island’s highest point, were used for signals during the war.

Maltese balconies, a characteristic style of  architecture, appear on houses across the island.

And our hero, Max, took a short recreational break on Malta’s smaller, more rural island of Gozo, as Will and I did with the mass of local tourists on Good Friday.

If you’re travelling this year, check out Books We Love’s selection of novels set in lands around the world. BWL authors offer a variety of historical and contemporary stories set in the United States, Europe, Australia, every region of Canada and more.