I became a teenager in February 1964, when The Beatles exploded on the North American scene. One week I was playing with dolls; the next week I was glued to top 40 radio and in love with Paul. So when my husband Will and I visited England this spring, it was natural for us to include a stop in Liverpool, home of the fab four. We discovered that Britain’s National Trust has bought John Lennon’s and Paul McCartney’s boyhood homes and offers tours to the public. Will and I reserved  spots on the 16 person van, not really knowing what to expect. 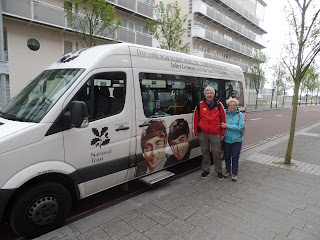 The driver took us first to John’s house in Woolton, an affluent middle class suburb. The home’s curator met us in the front yard and said that we can thank Yoko Ono for this tour. After John’s death, Yoko purchased the house and donated it to The National Trust, along with money to develop and maintain it. The National Trust later bought Paul’s home and hired a husband and wife to act as curators. The couple does research, buys artifacts from the boys’ time and conducts tours, which are the only way for people to see inside. No indoor pictures are permitted. The curator also asked us to turn off our cell phones to preserve the homes’ 1950s and 60s atmosphere.

The curator explained the basics of John’s story, known to most Beatles fans. When John was five, his aunt Mimi took over his upraising because she viewed his mother, her sister Julia, as irresponsible and John’s father was out of the picture. John adored Julia, the creative, rebellious and fun sister and was devastated by her death. The curator pointed out the intersection where Julia was struck by a bus. John’s boyhood friend, who has become a resource and friend of the curator, told him that Julia had stopped in to visit Mimi that night. The friend showed up, looking for John, and walked with Julia to the bus stop. Minutes later he heard and saw the crush, but was too late to save her. 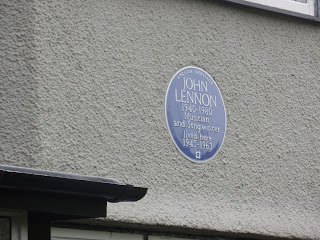 The curator took us around to the back entrance, since upwardly mobile Mimi had reserved the front door for esteemed guests like the minister. Paul always entered by the kitchen too. Before she met Paul, Mimi was concerned about the working class teenager’s friendship with John. But Paul’s manners and refined speech passed her test. In contrast, Mimi later judged George Harrison scruffy and scorned his Liverpool scouse dialect. Still she let the boys practice their music in her living room, perhaps to keep an eye on them. Mimi was concerned about John’s growing disinterest in his school work, despite his academic abilities. In retrospect her view that John would be a failure if he didn’t go to university seems narrow and short sighted, what who could foresee the delinquent youth would become a famous Beatle? Mimi’s husband died when John was about aged 10. So that she could afford to give John the opportunities she wanted for him, Mimi took in boarders and slept in her small sitting room. Evidently John appreciated all she did. The curator said that John phoned Mimi every week until his death.

Inside the home, the curator guided us through the ground floor, decorated in Mimi’s 1950s style. A few of her original pieces remain in the living room. She converted the dining room to a bedroom for John and Cynthia when they married and had baby Julian. Of course, John was always on the road by this point and rarely home. Cynthia found the living arrangement uncomfortable since Mimi didn’t like the baby’s crying. Cynthia would take Julian into the back yard until he calmed down.

The curator let us wander on our own upstairs. We saw John’s small bedroom, with a guitar and posters like the ones his friend remembered being on the walls. When Mimi sold the house, John was rich. He and Mimi kept few of the original furnishings and items. John bought himself an even more posh house and later one for Mimi when she was tired of fans hanging around outside her door.

After our hour at John’s and Mimi’s home, the van took us Paul’s house, about a 15 minute drive away. I’ll blog about that visit next month. Before leaving the tour, I asked the curator of Paul’s house if The National Trust had plans to buy Ringo’s and George’s boyhood homes. She said this would be problematic. Ringo’s home has since gone through many owners and would be difficult to return to its state at the time Ringo lived there. George’s home is on a quiet court and neighbours would find the fans obtrusive. But I expect The National Trust will find a way around these problems if their tours of John’s and Paul’s homes become super popular with the world’s legion of Beatles fans.