For years, I’ve listened to fellow writers rave about Scrivener, a word-processing program designed for book-length manuscripts and screenplays. Scrivener, it’s said, helps writers organize notes, concepts, research and documents for easy access and reference. One friend claimed he couldn’t write his novels without it.

Since Scrivener is most useful for first drafts, I told myself I’d consider it the next time I started a book. But when the time came this spring, I was reluctant to make the change from the WORD program I’m used to.  What convinced me to give Scrivener a try was learning that it offers a free 30 day trial. This is 30 USED days, which meant that if I signed up and found I wasn’t writing as often as I’d planned, the free period would only count for the days I logged onto Scrivener. So, if I only scriven twice a week the trial will last 15 weeks. I thought this would work well during this period that I’m easing into a new project while occupied with promoting my recently published novel.

Two weeks ago I downloaded the Scrivener trial program. Once that was done, Scrivener recommended starting with the two hour tutorial, although if I was in a hurry to start writing I could go for the 15 minute Quick session and return later for the details I missed. With my limited techy skills, I figured I needed the full deal and began the tutorial.

The first hour went pretty well. Most of the hands-on applications I did worked and they showed me how cork boards and other features could be useful for my book. 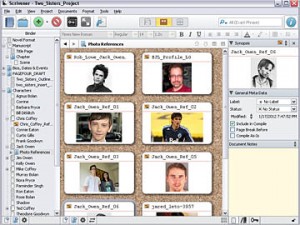 Except, I’d only finished the How to Begin section.

An hour later I was about half way through the tutorial and lost in a forest of Scrivener details. It was way too much information for me to learn and apply in one day. I shifted to the Quick session and reached the end in a reasonable amount of time with enough instruction to get started.

My advice for non-tech-minded writers learning Scrivener: go for the Quick session and expect it to take the two hours promised for the full tutorial. Of course, a problem with this is that I don’t know if and when I’ll feel motivated to go back to learn more, except when I want to transfer my whole project to WORD for a later draft. Apparently, Scrivener easily allows you to do this and, in fact, expects it, since the program isn’t designed for final formatting to publication-ready.

This picture on the left shows about all I’m doing now with Scrivener. It would be fun to pin pictures on a corkboard like the one above, but I haven’t tried this yet. I’m nowhere near having an accordion document like the first picture in this post.

I’m probably only using about one hundredth of Scrivener’s capacity. I’m also still getting used to the different look from WORD. In the past, I judged my pacing by number of pages written. I haven’t discovered a page numbering feature in Scrivener, although there’s a word-count at the bottom of the page that I can measure against the counts in other chapters and in my previous books.

I like Scrivener’s feel as the words are typed on the screen and I especially like the side bars where I can write notes about scenes and characters, things to follow-through in later chapters, points to research etc. I’m a little worried about losing the material if I don’t save my Scrivener documents properly, so I’ve been saving them in various places and trust at least one will work.

After four used days, I’m not sold on Scrivener, but plan to continue in order to give it a good chance.

I knew there was something familiar about the name Scrivener. I looked it up and was reminded of a short story my friend studied in her university course in American Literature: Bartleby the Scrivener by Herman Melville, published in 1853. In that era, a scrivener was a kind of clerk or copyist.  While the job became obsolete in North America, scriveners are still common in countries with low literacy rates; scriveners read letters for illiterate customers, as well as write letters or fill out forms for a fee.

Perhaps, the developers of Scrivener chose this name for us tech-illiterate writers. 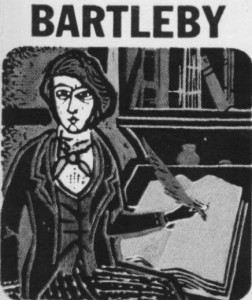 The gist of the Bartleby the Scrivener plot is that people kept asking Bartleby to do his job and then other things. He’d increasingly reply “I’d prefer not.” Eventually he preferred not to eat and died. My friend was drawn to story’s absurdity.

Critics have speculated that Bartleby might represent  Melville’s frustrations with his writing situation. Like Bartleby the scrivener who preferred not to do the sort of writing expected of him Melville found himself preferring to explore new territory in his novel Moby Dick.

I can only hope Scrivener doesn’t prove too foreign and complicated for me that I prefer not use it.