Before I read her memoir Open Heart, Open Mind, I knew Clara Hughes as the Canadian Olympic speedskater with the big smile. 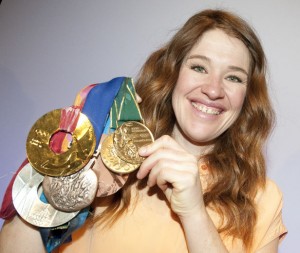 I was impressed when I heard that after retiring from speedskating, she would pursue Olympic cycling.  Tackling two Olympic sports, a summer and winter one. Wow.

I had forgotten or wasn’t aware that Clara had started her sports career with cycling, primarily long-range endurance road cycling. Her memoir describes its dangers, such as the moment you’re speeding up or down a mountain and a vehicle appears from nowhere. A colleague’s death in a bike race prompted Clara to leave cycling for her first sports love — speedskating, which had been inspired by Gaetan Boucher’s skating at the Calgary Olympics. After winning a fist full of skating medals, she wrapped up her Olympic career with a second ride at cycling. 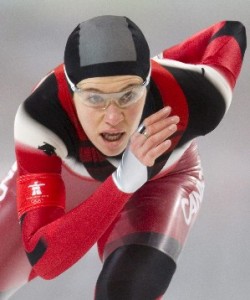 It wasn’t an easy road to the podiums. I’m sure it isn’t  for anyone, but Clara’s life might have easily spiralled in the opposite direction. Her father was an alcoholic, quick to anger and verbally abusive to his wife and two daughters. Clara’s mother, the daughter of an alcoholic, divorced her husband when Clara was young. As teens, Clara and her older sister acted out, drinking, smoking, partying and sleeping around. Her sister sank into severe  depression, from which she never fully recovered. At the time of writing, she was living in a long term care facility.

Clara was rescued by sports. Her first cycling coach was harsh. He drove her to excellence, while undermining her self-esteem. Ultimately, she dropped him, but credits him for her early accomplishments. This is a feature I admire about the book. Clara doesn’t portray the people in her life as black and white characters. Her father could be cruel — he called her less successful sister ‘the other one’ rather than refer to her by name — but Clara often looked to him for advice. Several times he guided her through a difficult issue. 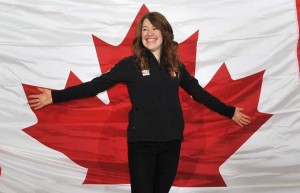 Clara had luck – her athletic gift. She had and has drive. She managed to find her perfect mate. Athletic and free-spirited, Peter supported her through her grueling sports competitions and beyond.

In the midst of riding and skating to the top, Clara suffered from recurring depression and related problems, such as over eating. This is another thing that struck me about the memoir. After reading my six psychology books this winter, it stood out that Clara consistently attributes her problems to her family and sports situations, not biology.  Only toward the end of the memoir does she concede there is likely a genetic component to her problems, given her multi-generational history of alcoholism and psychological issues, but this doesn’t matter. She prefers to seek solutions without medications which, she feels, are more likely to mask than treat symptoms. In addition to lifestyle changes, she tried an unorthodox therapy approach that she believes worked. 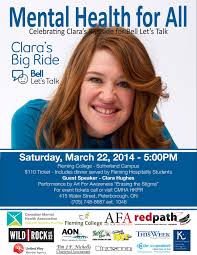 Reaching out might help her too. She has donated winnings and loaned her name to two causes dear to her heart: Mental Health and Kids Can Play, a project devloped by an Olympic colleague that improves life for children in third world countries through playing.

Clara is a champ on every level.