My first creative writing courses, taken through Concordia University Continuing Education in 1992, required students to submit final assignments. For Introductory Creative Writing, this was a portfolio of poems and/or short stories up to a specified number of pages.  Magazine Writing required a short story and a magazine or newspaper article, with a query letter.

During that fall term, I only came up with one complete short story, which I handed in for both courses. This felt like cheating, but I ultimately found it helpful to get comments from the two instructors. Gerry, the poet teacher of Intro, wasn’t impressed with my poems, but he liked the story. Denise,  the Magazine Writing teacher, read my scene of group dialogue to the class. I later sent the story to a literary magazine and received a hand-written rejection saying the story was well-written, but they weren’t able to publish it. I was crushed and never sent the story out again. I didn’t know then that any rejection beyond a form letter was a positive.

Denise’s fiction instruction focussed on imagery. She urged us to start with an image and write the story from there. I didn’t get what she was driving at.  That final story I gave her used an image of a ferris wheel, but imposed it on the story after I had the basic plot, characters and theme. Denise’s approach would have been to start with the wheel and let the story evolve from it. Despite the kind words of the literary magazine, my story probably wasn’t very good. 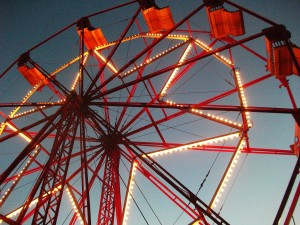 Denise also advised us to write in the first person to practice getting into the narrator’s head, a writing concept I wasn’t aware of before taking the course. I was used to stories in distant third person. Once upon a time in a land far away … After a few assignments where I tried first person, I grasped what she meant and was soon able to transfer that skill to third person.

Today, when teaching courses, I sometimes feel like a point-of-view Nazi, harping on students to stay with a third person narrator and get deeper into his or her thinking and speech patterns, rather than shift all over, so readers will engage with the POV character.