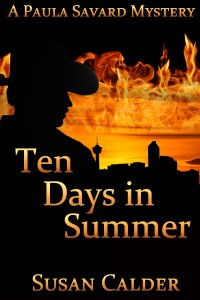 Here’s the back cover blurb for my new novel Ten Days in Summer:

Calgary, Alberta, gears up for its ten-day Stampede festival. When a hoarder dies in a suspicious house fire, adjuster Paula Savard sets the revelry aside to handle the property insurance claim. But Paula’s interviews with the hoarder’s bickering heirs raise questions. What are they hiding from each other and the police? Are they trying to help or to sabotage the investigation? Did one of them set the blaze to kill a relative and hasten an inheritance?

The case turns personal when Paula’s daughter becomes involved with a suspect and moves into his home. If Paula learns the truth, she can ensure her daughter’s safety. While the police are occupied with keeping order during the Stampede, Paula digs through the hoarder’s life. She unearths betrayal, murder and a long-ago secret that led to his death. Exposing the truth would put Paula at risk, but free a troubled family.

Ten Days in Summer is the sequel to Deadly Fall. I hope these reviews of Deadly Fall bode well for the series:

“A pointedly nuanced debut novel, …sparkles with tone and energy that set the pace, a concise storyline, and edgy dialogue that moves the story forward…a debut worth reading and a possible series with insurance claims providing a minefield of potential stories.” — Don Graves, Hamilton Spectator

“Paula is an intelligent, determined, often critical (though in a good way) yet still compassionate sleuth, who is front and center in this mystery debut. She’s a solidly developed character, one readers will want to get to know better, with an interesting supporting cast, which should serve her well in subsequent books. With possibly a new profession in hand, and her first case behind her, readers will look forward to seeing how she fares.” — Mysterious Reviews